Home Europe Player’s departure ‘isn’t ruled out by anyone’ as Tottenham hover for €30m...
SHARE

Tottenham Hotspur continue to be linked to the Benfica youngster Jota, even though things haven’t advanced much.

This Thursday, newspaper Record has an article saying the Eagles are struggling to renew the player’s contract, since he’s not accepting the current conditions.

Benfica are trying to multiply Jota’s salary by four. The problem is that since his current contract is that of an academy player, that pay raise wouldn’t make him even with much of the first team squad.

That’s why the player has been rejecting the first offers he’s getting, and the Lisbon side know they will have to make a bigger effort to keep him. 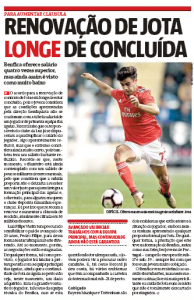 Record writes that Bayern Munich and Tottenham Hotspur are both attentive to the situation, although neither of the clubs have submitted bids for Jota so far.

It’s claimed that the player’s departure from the Eagles ‘isn’t ruled out by anyone’, especially because if he doesn’t sign a new deal, they can’t raise his €30m release clause.