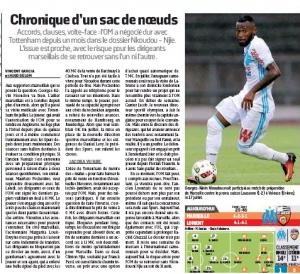 Marseille star Georges-Kevin N’Koudou has been training with Tottenham for a couple of days, according to L’Equipe on Friday.

L’Equipe say Mauricio Pochettino wants N’Koudou to slowly resume his training, and the player has been doing ball free sessions to improve his physical condition.

It is reported Tottenham and Marseille have signed final papers confirmed a €11m deal for N’Koudou on Monday.

The 21-year-old has also signed a five-year contract, and L’Equipe believe there is very little scope for anyone to turn back from their decision now.

There is a gentleman’s agreement between all parties, and N’Koudou has the necessary approval to train with Tottenham.

N’Koudou has rejected offers from other clubs , including Hamburg in the Bundesliga. In fact, Pochettino had to call the youngster again to reassure him about his intentions, and the player is also keen on working under the Argentine manager.

L’Equipe have also claimed that Tottenham tried to reduce the transfer fee of N’Koudou by inserting clauses dependent on his possible injuries. There were talks of a €6m fee plus bonuses, but that was rejected by Marseille.

In the end, both the clubs agreed to a €11m fee. It’s worth pointing out there were similar claims by a Marseille based website Le Phocheen earlier.