The defender signed a one-year deal at the John Smith’s Stadium and has an option to extend it by a further season.

In his first campaign in England, the 27-year-old made 30 appearances in all competitions, in a season which saw the Terriers relegated from the Premier League.

Though Jan Siewert’s side have an option to keep him at the club for one more year, the World Cup winner has already communicated to the English club that he wants to leave them in the summer transfer window, and has spoke to Kicker about it.

He said: “ I do not know yet where I will play [next season]. The story with the option had settled after I told Huddersfield I did not want to play in the second league [Championship].

“I want to go back home, to the Bundesliga. Even if I can imagine two or three other possibilities [clubs in Spain and Italy]. But the priority is the Bundesliga.”

The German, who can operate as a left-back, right-back, and wing-back also stressed the importance of David Wagner over his decision to join Huddersfield in 2018.

The latter left the club mid-way through the 2018/19 season and is currently in charge at Schalke. On Wagner, Durm said: “I have a great relationship with him. There were also discussions, I can say that.” 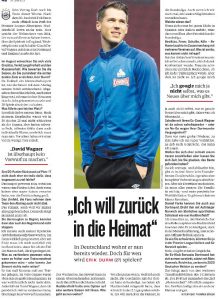 Kicker asked him if there is any possibility of continuing in the Premier League with the Canaries. Durm said, “No, there are no talks [with Norwich].”