Moussa Marega’s two assists against Monaco for the Champions League this week have just confirmed the great start to the season he’s been having.

After returning from a loan spell at Vitória Guimarães, the striker took a place in Porto’s starting team right away and has already scored five goals this season.

Even before the start of the season, it seems there were some Premier League clubs aware of his potential who tried to sign him during the summer.

Crystal Palace and Brighton & Hove Albion reportedly made offers for the player, but neither of them was able to convince the Portuguese side to sell. 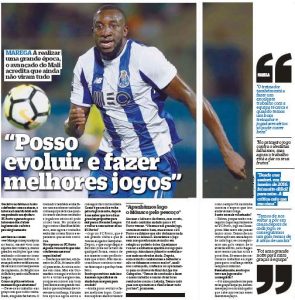 As Marega has been in the spotlight, he’s been talking to the media a lot, and gave an interview to newspaper O Jogo this Friday.

One of the questions was especially about the two Premier League offers he received during the summer, but the player made sure to leave it in the past, not leaving any hints for Brighton and Crystal Palace.

“I play for FC Porto, which is a great club and they have already won the Champions League. It did not bother me and I keep trying to do what I do well here.”

O Jogo earlier this month claimed that Brighton had offered €10m, and Crystal Palace €11m. That sounded like a fair amount at the time, but there’s no doubt Marega’s price just went much higher. So maybe his €40m release clause is what Porto will demand in case the Eagles or the Seagulls go for him again in the future.