FC Porto now seem happy to have kept Moussa Marega in their squad for the 2017/18 season.

As reported by O Jogo today, the club had two concrete Premier League offers for the player, but turned both down and are now seeing good results on the pitch.

Brighton & Hove Albion and Crystal Palace are said to have made offers of over €10m for the striker, with personal terms which attracted him as well.

But even with the 26-year-old being a rotation player, the club thought it would be wiser to keep him. 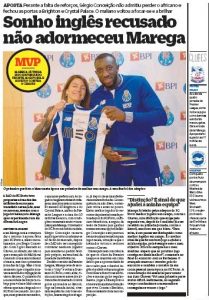 Marega now has three goals in five league games, and has been crucial for Porto in a period which their main striker Tiquinho Soares has been injured.

The player wanted the Premier League move, but is now praised for being focused on his club and knowing that if he continues playing this way, he can get the transfer in the next summer window.

O Jogo claims that Brighton offered around €10m and were the ‘most insistent side’ for Marega. Crystal Palace, however, made a higher bid, of €11m.

There’s every chance both Brighton and Palace will be watching Marega over the season, with the London club perhaps dropping out if Marega was a Frank de Boer target.