That has of course been immediately linked to a possible transfer, with 20Minutes naming Leeds United as a possible destination for the attacker.

Thursday saw FC Basel links to the Macedonian international resurface, but 20Minutes don’t believe that’s a clear route at the moment, although they don’t sound completely sure about Leeds United either.

Alioski to Leeds United hasn’t seemed as clear as Samu Saiz and Felix Wiedwald. That doesn’t mean a move isn’t happening, but there doesn’t appear to be a lot of concrete 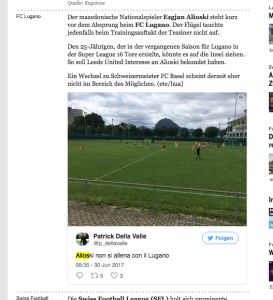 Sport Witness contacted the player’s agent last week to try and get the slant from their end, but there was no interest in talking about a move to Leeds United.

This one stutters on, and with Alioski not being at Lugano training, the Swiss club are likely to be asked questions, and have to answer them, soon enough.

Club rule out move for Arsenal man despite him choosing them...