Yesterday, TF1 in France started building some hype around a possible Yann Karamoh departure from Caen, as Arsenal and West Ham were linked with the 18-year-old forward.

Jumping on the bandwagon and not wanting to miss out, L’Equipe in France have their own say on the youngster’s situation, and claim that three Premier League sides are after him: the Hammers, Everton and Southampton.

We explained yesterday why it made sense for the Hammers to turn to Karamoh after they missed out on Henry Onyekuru, which means Everton’s interest in the player also seems to fit with what both clubs were looking for. 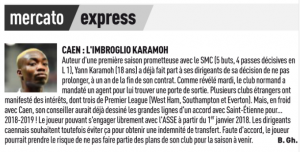 Similar in age, versatility and ability, Karamoh and Onyekuru will have been on any club’s shortlist wanting a quick and promising young forward, and now that the Toffees have signed the Nigerian, we’d be surprised if they went after the Caen starlet.

As for the Saints, well, seeing as before they were also linked with Onyekuru before West Ham and Everton pulled ahead, it wouldn’t be surprising in the slightest if Claude Puel, as an alternative to the now Everton forward, had also placed Karamoh on his shortlist.

Seeing as Southampton have only recently changed managers, it will take some time for papers and agents to find out who Mauricio Pellegrino is really after for next season, meaning we might see a few Puel targets still being linked with the club over the past few weeks.

Perhaps the Spaniard will also want Karamoh, but as things stand, him being a Puel target, especially when comparing his profile to Onyekuru’s, makes a lot more sense.

However, and it’s a big one, L’Equipe explain that, with one year left at the end of his contract, the player has told Caen he doesn’t want to stay beyond his current deal, meaning he could leave on a free in January.

While that would normally be good news, rumour has it his agent has already reached an agreement with Saint-Etienne for next season.

But, not wanting to see him go on a free, Caen are said to be working hard to get some money for him this summer, which is where the Premier League clubs come in.

Go on, someone make them an offer they (including the player) can’t refuse.