Eden Hazard has been keen on signing for Real Madrid for much of his life.

Throughout his latter years at Chelsea the situation was made clear repeatedly. Hazard was ready for the stage which he’d always aimed for, set to leave Stamford Bridge behind and become a darling of the Bernabeu.

It hasn’t been the easiest start for the Belgium international, yet the likelihood is that things will get better. Hazard has received some criticism in the Madrid leaning media, but it’s nothing like what other players have gone through before him.

He need only glance over to Antoine Griezmann at Barcelona to see a greater scrutiny, and this is what happens at Spain’s biggest two clubs.

It isn’t anything new, it isn’t especially hyped up, and it was always going to be the case at some point after he swapped Chelsea for Real Madrid.

Therefore, it’s a surprise that Tuesday’s edition of HLN says Hazard is ‘shocked’ and ‘overwhelmed’ by the scrutiny and pressure he’s found since the transfer.

Now back in the comfort of the national squad, the Belgian newspaper says there’s nowhere better for the player to forget his club problems.

HLN state: ‘The fact that Spanish TV channels and radio stations almost spit around the clock spilling an overdose of opinions has overwhelmed him. In London things never assumed such proportions.’ 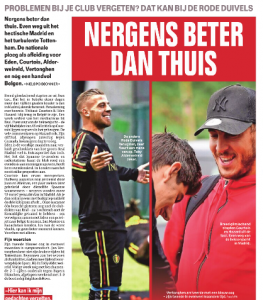 Even a fan with a passing interest in Real Madrid and/or Barcelona would be aware of the incredible coverage the clubs get, and how that can easily turn into negativity towards players.

Should Eden Hazard’s surprise be genuine, then it’s frankly astonishing he wasn’t better prepared for what would face him.