In case you weren’t aware, Islam Slimani is flourishing away from Leicester City so far this season.

Following a failed loan at Fenerbahçe last year, the striker returned to King Power Stadium with hope of making Brendan Rodgers’ side, but when it became apparent that wouldn’t happen, a move to Monaco was organised.

The loan with a view to buy (reportedly at €10m) saw the Algeria international reunited with Leonardo Jardim, and the Portuguese manager has once again managed to get the best out of the veteran.

The 31-year-old has scored four goals and assisted teammates five times in six league games this season, which hasn’t gone unnoticed by the French press.

France Football are among those heaping praise on the striker, dedicating a chunk of their weekly magazine to Slimani, including an interview with Bruno Cheyrou, who was a scout with Nantes back in 2013 who had taken a liking to the forward when he was still in Algeria.

This was before his Sporting CP spell, but the forward has remained a favourite of the former midfielder, who isn’t surprised about his success away from Leicester at Monaco. 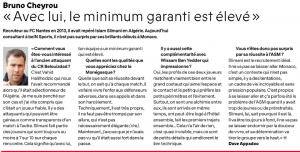 He said: “He’s the ideal signing. He won’t let himself go. Monaco isn’t a simple context, there’s temptations, an amazing lifestyle and no pressure. It’s easy to let yourself go and that’s often been their problem when there’s been too many youngsters or players close to retirement.

“Slimani knows why he’s there. He’s always going to give his all. He won’t let himself be lulled by the easy lifestyle there, and his determination will push the group to do better”.

Despite still picking up an assist at the weekend, Slimani wasn’t able to help the principality club pick up the three points as they lost 3-1 to Montpellier away from home.

Still, that €10m clause is looking more and more attractive as the weeks go by for Monaco, and at the rate things are going, them triggering it would come as a surprise to absolutely no one.