Isco moved to Real Madrid in June 2013, when he’d looked like making a switch from Malaga to Manchester City instead.

The English club were close to having a deal wrapped up before Madrid came in at the death and snatched the player away.

Since then there’s been aimless claims about the deal eventually happening. Any time Isco is having a struggle at Real Madrid, which has been relatively often, there’s been claims of Manchester City looking to get the player.

This weekend, AS report that an agent, claiming to be working on behalf of City, has contacted Isco’s environment in recent days to relay interest from Pep Guardiola’s side. 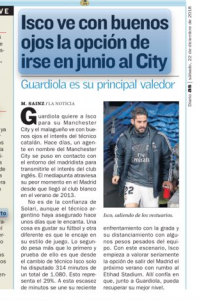 Subsequently, Isco looks on a move to the Etihad ‘with good eyes’.

The player isn’t someone Santiago Solari so far feels suits his system, he’s recently fallen out with the club’s supporters, and the Spanish newspaper even claim Isco isn’t getting on so well with several senior teammates.