Over the past few weeks, we have relayed various claims made in Italian sports media about Tottenham Hotspur and Newcastle United’s chances to sign Franck Kessié in the summer.

That’s according to Sport and they mention about the Toffees in their report, that focuses on efforts made by Barcelona plan to acquire the midfielder’s services.

The 25-year-old has less than six months left on his contract and has ‘notified’ Stefano Pioli’s side he would not renew the contract as he has not accepted the new offer. He has decided to leave the San Siro and sign for a new team in the summer ‘at no transfer cost’.

Barcelona are among the options for the Ivory Coast international and having already made contacts with his camp months ago, they have ‘intensified’ negotiations in recent weeks.

Regarding the Premier League ‘great teams’, the newspaper says these have ‘not come to fruition’. The Toffees are not included in this list. 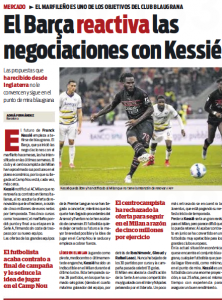 Frank Lampard’s side, on the other hand, made an offer to Kessié, but Everton’s proposal has ‘not convinced him’.

That’s because the English clubs Kessié was hoping for either didn’t come forward or their offer wasn’t convincing enough, while the ones that made a proposal, like Everton, don’t please the player.

Sport, therefore, explain the idea to make a switch to Barcelona ‘begins to gain strength’ for Kessié, leaving the Toffees either in need of improving their offer or moving onto other targets.