Following their Champions League win, Chelsea have made it clear they will not be resting on their laurels, wanting to ensure they can dominate English football as well.

This has translated into reported attempts to sign Erling Haaland from Borussia Dortmund, who have put up barricades around the Norwegian star, which has left the Blues looking at alternatives.

One of those, it seems, is a former player of theirs, as Gazzetta dello Sport explain Chelsea ‘rang’ Romelu Lukaku to try and convince him to return to Stamford Bridge.

It’s said the Belgium international ‘listened’ and ‘thanked’ the Premier League club, but then ‘kindly said no’.

For him, the ‘door is closed’ and ‘there is only Inter’, despite it being ‘much more than a survey’ from his old club. 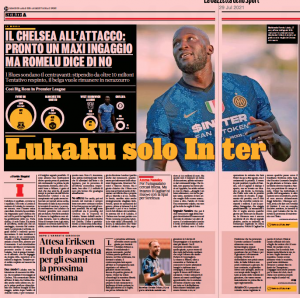 Gazzetta say ‘a proposal has arrived’, with Chelsea offering a ‘double digit salary’ of ‘over €10m per season’.

However, Lukaku ‘nipped it in the bud’ by rejecting it for two reasons: firstly, he’s ‘grateful’ to Inter who ‘took him away from the Manchester United nightmare’ two years ago, and because ‘returning to England doesn’t stimulate Romelu’ as the idea of going back ‘to where he has already been doesn’t fascinate him’.

Either way, Chelsea ‘never got to the point of making a real offer’ to the Serie A side, and ‘it would have been strategically wrong to do so’ in light of the player’s refusal.