Free to talk to clubs as his contract at Milan is set to expire in a couple of days, Alessio Romagnoli has a strong preference to play for Lazio.

However, they are yet to offer him a contract he is happy with, which has opened the door for a couple of other clubs, like Fulham.

The newly promoted side are on a mission to improve their squad ahead of a tough season in the Premier League, and a new centre-back appears to be on Marco Silva’s list.

Romagnoli is one of the options, and a contract would have already been offered to the Italian, if Corriere dello Sport are to be believed.

They explain that, regarding a move to Lazio, ‘only the patience of Alessio still keeps the operation going’, because he has ‘not tired of waiting and so far has frozen the Fulham offer’. 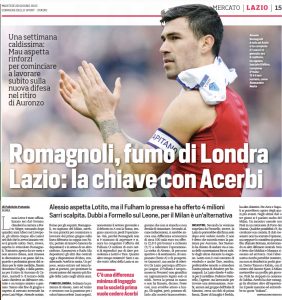 The Cottagers have reportedly put a €4m/year post tax wage package in front of him, but he has decided to ‘give priority to Claudio Lotito and Igli Tare’ for now.

The big question, however, is how long that will last, with those in charge of matters at Lazio hope he can hold on a bit more.

It’s not a question of money, because ‘if that were the case, he wouldn’t have waited long’.

That doesn’t mean Fulham are out of the race, because he could very quickly defrost that contract offer, and they still represent a real danger for the Serie A side.