Home Europe Player explains why he left Wolves despite arriving with ‘a lot of...
SHARE

Arriving in the summer with a lot of hype, Patrick Cutrone didn’t quite get the chances he desired at Wolverhampton Wanderers.

The forward only spent six months at Molineux before being granted the option to leave, where Fiorentina took advantage of the situation and secured his services for 18 months on loan.

Since then, he’s made four appearances in all competitions and scored a goal in the Coppa Italia, and he seems far happier to be back in his home country rather than on the bench in Wolverhampton, where Nuno Espirito Santo seemed reluctant to use him regularly.

Already telling Labaroviola that he felt Wolves ‘no longer trusted him’, which is why he decided to leave when Fiorentina came knocking, the young forward expanded a bit more on his desire to switch clubs for Gazzetta dello Sport.

He said: “I went to Wolverhampton with a lot of enthusiasm. The fans loved me, they dedicated a chant to me. In the end, I scored three goals from few minutes played, but I found a manager who preferred to rely on his loyalists”. 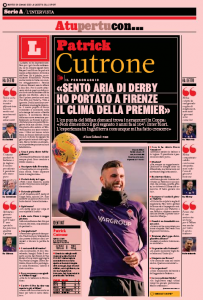 After all, with Wolves switching to a one striker formation and Raúl Jiménez once again having a great season, it’s understandable why the Portuguese manager wanted to use one of his best players, even if there is a talented 22-year-old sat on your bench.

It just didn’t work out for Cutrone, and perhaps he’ll come back in 18 months, with Jiménez elsewhere, and get the chance he wanted to shine in the Premier League.

In the meantime, it’s up to him to perform in Serie A once more.