Sandro Ramirez is ‘counting the hours’ to an Everton transfer, report AS in their Friday edition, and is again being linked with Sevilla.

Sandro seems to be second or third choice for half of La Liga right now but appears to have a preference for Sevilla despite knowing he’s not really the one they want.

AS believe if Sandro moves from Everton to Sevilla he has a chance of being at the World Cup.

That sounds outlandish given his season so far, but it’s explained Julen Lopetegui trusts the player and Spain have ‘doubts’ in his position.

Sevilla sporting director Oscar Arias has Sandro as part of his ‘winter planning’ but there’s no claims of talks with Everton, probably because of the Batshuayi situation. 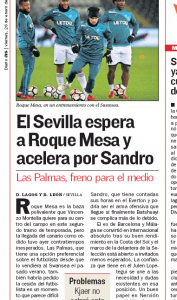 Should Sevilla pick up the telephone then those in charge at Goodison Park will find it hard to get a reasonable deal.

The Spanish club will probably ask for a free loan with a favourable purchase option and for Everton to continue paying a percentage of the player’s wages, or for Sandro to take a pay cut.