Tuesday’s edition of L’Equipe has a rather lengthy article (well, we say article, but it could easily be called a character assassination instead) on Thomas Meunier, and, of course, there’s a mention for Manchester United.

It kicks off by explaining that last summer, the Belgian right back was considered one of the best in his position in Europe, but what’s happened since leaves him on the edge of a PSG exit.

With only a year left on his contract, there’s been no offer of a renewal, which from the club’s perspective is ‘mostly an invitation to leave’.

L’Equipe explain that Meunier was a starter for the first three months of the season, and scored for three games in a row in the Autumn. Then Tuchel was unhappy with him against Napoli, he was taken off, and Thilo Kehrer was largely preferred from that point.

Then Meunier picked up a concussion, and due to injury was forced to miss the match against Manchester United. The French newspaper say the player’s dedication was questioned: ‘he did what was asked of him during his convalescence but no more’

Then came social media trouble. He ‘liked’ a message showing of a fan display at Marseille, and did the same for a post saying Manchester United had won 2-1 against Watford… ‘barely three weeks after they’d eliminated PSG’.

L’Equipe add: ‘This season, he even went to see a match at Old Trafford, taking in his luggage Julien Roger, a video analyst of the club, which left annoyance. The next day, the plane to Paris could not take off again because of the weather and meetings at Camp des Loges could not be honoured.’

Meunier is said to have become aware that his future was away from Paris. It’s explained he’s felt in the past that competition for a place with Dani Alaves was ‘biased’ because of the Brazilian’s friendship with Neymar: ‘His relationship with the Brazilian clan probably did not favour his plans.’

It’s explained that this season the fullback ‘didn’t really get close’ to his South American teammates, and managed to annoy some when entering the dressing room with his son following the Coupe de France final defeat to Rennes.

And here’s the important line: ‘In short, these different episodes have finally convinced Antero Henrique, the sports director, who was already not his first supporter, to separate.’

In reality, PSG have been edging Meunier out for longer than just this one season, Alves was supposed to do that. The French club, and perhaps specifically Henrique, love a good character assassination, and the Belgian isn’t the first and won’t be the last to see the 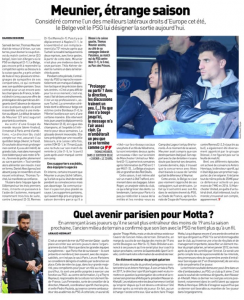 French media help PSG do it.

L’Equipe say the 27 year old has ‘always been a big fan of the Red Devils’ and by that they mean Manchester United, not the Belgium national team.

Therefore, a transfer to Ole Gunnar Solskjaer’s side is seen as a possibility, but only if Manchester United are interested enough to make the effort.

Interestingly, the same page of the French newspaper has an article on Thiago Motta and his falling out with Henrique, which started when he was still a player for the club. Motta is now thought to be on the verge of leaving his role as coach of PSG’s U19 team with his relationship with the sports director thought to be very poor.

Some at the club want to give Motta an ambassadorial role, but L’Equipe say it’s ‘hard to imagine’ Henrique would be pleased to see him stick around.