Having left Germinal Beerschot’s academy in 2005, Radja Nainggolan spent the rest of his playing career in Italy and is currently on loan at Cagliari from Inter Milan.

The former Belgium international spent over four years at AS Roma and that’s when he caught the attention of a few European clubs, with Chelsea reportedly among them.

Nainggolan has given an interview to the Belgian media and Het Belang van Limburg have gathered comments made by the player. When asked if he will return to Belgium, the Inter owned midfielder instead revealed he had an opportunity to join the Blues.

“A return? I never played at the highest level there. I only played soccer in Belgium as a youth player. I have been playing and living in Italy for fourteen years now, I think my career will end here.

“I no longer see myself playing in another competition. I was able to go to Chelsea three years ago, but it didn’t happen. I don’t think I’ll ever leave [Italy] again.” 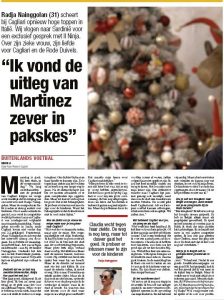 The 31-year-old doesn’t explain why he couldn’t seal a switch to the London based club.

Last month, we covered Nainggolan’s claim that Antonio Conte wanted to sign him for the Europa League winners in the past. The Italian was in west London for two seasons between 2016 and 2018.