Portuguese newspaper Record has an almost interesting story for Porto fans today, in which they report the situation of Chancel Mbemba’s transfer from Newcastle United.

With a headline saying ‘Mbemba closer’ and a picture of him at an airport, it first looks like the defender is finally heading to the North of Portugal to conclude his move.

However, Record are actually denying some claims that showed up on Monday afternoon.

The picture of the player at Schiphol airport had been spread through social media, with people saying he was flying to Portugal. But the newspaper managed to confirm, presumably via Porto themselves, that the claims are false. 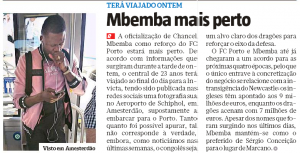 Still, Record insists that Mbemba is a top target for manager Sérgio Conceição this summer, and after signing a four-year pre-contract with the club, he continues to wait for Porto and Newcastle to find a deal.

The Dragons are said to be offering €7m, while the Magpies demand €9m.