But maybe this is a sign? That’s what Mundo Deportivo seem to insinuate on their Tuesday back page.

After stating Pogba and Jose Mourinho have a ‘complicated’ relationship, it’s claimed Barcelona are aware the Frenchman is considering leaving Manchester United.

The Catalan newspaper then states: ‘In recent days, in perfect Spanish, he has said that it’s a pleasure to see Messi play and that Leo will continue to be the best in the world. His agent Mino Raiola has spoken with Barca.’ 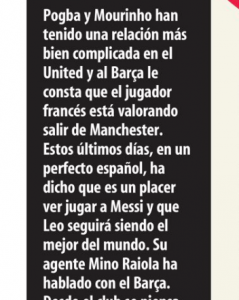 Ah, the double whammy of both speaking Spanish and praising Lionel Messi, he may as well get a Barcelona tattoo and have done with it. Or perhaps have the Estelada flag shaved into his head for France’s next match.

A move won’t be happening, explain Mundo Deportivo, because the financial demands of Mino Raiola and the player are considered ‘economically unfeasible’.

Talk has quietened somewhat on a potential Manchester United exit for Pogba, but there’s plenty of time left in the window for that to all change.