Just a day ago, we covered Portuguese takes on Vitória de Guimarães being in poor form, and how bad it is to have such a difficult game against Arsenal at this stage of their season.

But it turns out some people have a different opinion about this, and that’s the case of their former player Pedro Mendes.

The 40-year-old, who had some experience in the Premier League playing for clubs like Tottenham Hotspur and Portsmouth, has given an interview to newspaper O Jogo about the upcoming Europa League clash.

Mendes knows that Vitória have just been knocked out of the Portuguese Cup by a third division side, but says it’s actually good to face the Gunners now.

“If Vitoria played for the league after the defeat with Sintra, there would be a huge pressure to win. It’s best to face Arsenal now, in a game where the obligation to win is from the opponent,” he told O Jogo. 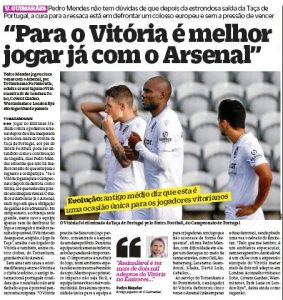 “Vitoria need to make a perfect game, focused and waiting for an imbalance. For a theoretically inferior team, set pieces are important. The important thing is to enjoy the game, in a spectacular atmosphere and against a top opponent. Even if the first impact isn’t easy, the team must avoid the initial nervousness. This is a unique opportunity for the team and players, a game that doesn’t happen often.”

O Jogo recalls that Pedro Mendes could never beat Arsenal, having two draws and three defeats against the Gunners. He only played at the Emirates Stadium once, but has given Vitória fans a few tips about their trip to London.

“As I recall, it’s a spectacular atmosphere without being aggressive. It’s remarkable a club with the European expression of Vitória is having more than two thousand fans in London. I recommend visits to Soho, Convent Garden, Westminster, Park Lane or the London Eye.”