Home Europe “Why not go some day?” – Wolves player on potential transfer, and...
SHARE

Rafa Mir is increasingly becoming a darling of the Spanish sport media.

His displays for the country’s U21 side have pushed him into the consciousness and there’s much praise going the way of the 21 year old. He’s managing to compete with Real Madrid owned Borja Mayoral for a starting spot in the team, and producing when given the chance.

In their Saturday edition, Marca say: ‘He has played 176 minutes with the under-21 team distributed over five games and already needs all the fingers of a hand to count the goals he has achieved with La Rojita.’

The Spanish newspaper have been speaking to the youngster and whilst the chat started off with questions about the national team and his success, it then got more interesting for Wolves fans.

Signing Mir from Valencia in the last winter transfer window, Wolves loaned him out to Spanish second division side Las Palmas in the summer. Mir had been strongly linked with swapping Valencia for Real Madrid instead, and it seems that was the move which most excited the player.

Marca quoted him as saying: “When a great club looks at you, every player thinks about moving to that place, it’s true that it depends on other people because there are advisors or sports directors. It could not be and I’m staying with the positive that I got from England. We have to keep working… and why not go some day?”

Having distant Real Madrid dreams isn’t such an issue for Wolves, because the player would have to prove himself first. What may be more concerning is his comments about a struggle to settle in at the club, and a frustration over playing time. 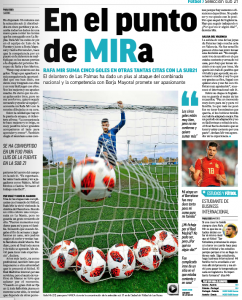 Marca say Mir ‘doesn’t keep the best of memories’ about his stint in England, quoting him as saying: “It was a very hard time for me and my family. What bothered me the most was not having the minutes I wanted, if I had got them I would have adapted better. It was a period of adaptation and it is not easy to enter mid-year.”

There’s a difficult decision to make in the summer. Mir isn’t going to be happy returning to be a bit part player.