On Friday, we made some effort to explain how the Luis Diaz to Newcastle United rumours had got out of control and left reality far behind.

Earlier in the week, we’d covered a Magpies scouting trip, with the Premier League club sending someone to watch FC Porto for the second time recently. Luis Diaz impressed during the match, which we pointed out, and from there things were twisted.

And then twisted some more.

The story went around the English media, over to the player’s native Colombia, back to Portugal… and the end result was a claim Newcastle were ready to match the attacker’s €80m release clause.

Of course, all of this was simply reports being added to so they became more dramatic.

Record, a Portuguese newspaper, have chased after the story, and heard there’s been ‘no contact’ from Newcastle United, either with Porto or those representing Luis Diaz. 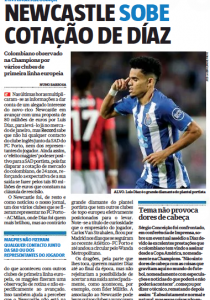 Regardless of that, it’s explained the story is welcome for Porto, because it associates their player with a price-tag of €80m. Newcastle are ‘not at the forefront’ for the signing, and Porto want to keep Luis Diaz until the end of the season.

That should be that, for now at least.