All of a sudden, Newcastle United are heavily linked to Porto striker Luis Diaz. And as usual, we’ll need a few paragraphs to explain how this story grew so quickly.

It all started on Tuesday, when the Magpies were one of the many clubs who sent scouts to the Champions League clash between the Dragons and Milan.

Sport Witness ran a story about that at the time, pointing out that by scoring the winning goal, the striker, who had already been top scorer at the Copa America, certainly drew attention from scouts present.

Other English outlets then did the same, and then Jornal de Notícias brought a big piece about those claims. Crediting the UK media, they said Newcastle could even trigger Diaz’s €80m release clause at Porto. 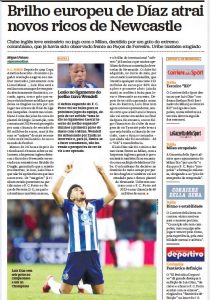 That was followed by a tweet from Portuguese outlet Sport TV, which read: “Newcastle United are preparing €80m to take Luis Diaz. What do you think of this possible deal?”

That made a lot of noise, especially in Colombia, where the local sports media got quite excited with the potential move. So journalist Pipe Sierra tried to clear things up and said there have been no negotiations for now.

“Luis Diaz at Newcastle? There are not even contacts,” he said on Twitter. “With €80M, they’d be paying the release clause.

“However, the ‘Magpies’ have not yet achieved new investment for sponsorships and that means that their expenses for transfers still take a long time to develop.”

So unless the Portuguese media soon comes up with something new on this story, we should say that too many outlets are being carried away by the Magpies’ simple visit to the Estádio do Dragão on Tuesday.