Since Antero Henrique left Portugal to take a sporting director job at Paris Saint Germain in 2017, the media from his home country hasn’t had a lot of updates on his situation.

Frequently linked to Premier League clubs, it’s been mostly the French and the English press who’ve been bringing rumours about his future.

For the past few days, we’ve seen the official being linked to Manchester United and Newcastle United. And when covering these claims today, Portuguese newspaper A Bola surprisingly brings their own information on his situation. 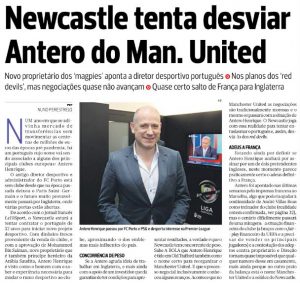 They write Newcastle have some ‘heavy competition’ in their pursuit of Antero Henrique. That’s because he’s seen as the ‘certain name’ to ‘reorganise’ things at Old Trafford.

A Bola says the talks with Manchester United have been advancing. The problem is that things at the Red Devils are ‘traditionally slow’, and it’s been going the same way with him.

That gives Newcastle United a bigger chance. The Magpies would be using this as an argument to work quicker and win the race for the Portuguese official.