Newcastle United have a desire to bolster the centre-back position in the winter market and Diego Carlos appears to be their main target.

On Monday, Marca explained Sevilla are awaiting a huge offer from the Tyneside club for the defender. It was also reported the 28-year-old doesn’t want to ‘miss the train’, while he is not causing any issues at the La Liga side.

The Brazilian first arrived in Europe in 2014 when he joined Estoril, and Mario Branca was then the sporting director of the Portuguese club.

ABC Sevilla spoke to Branca, who believes the player can try a new experience elsewhere or continue with Sevilla and end up being a legend there.

Branca also praised the centre-back, and the newspaper explains he is not the first one to praise the South American. It’s stated José Mourinho endorsed Carlos to the leaders of AS Roma, but they didn’t have sufficient capital to buy him. 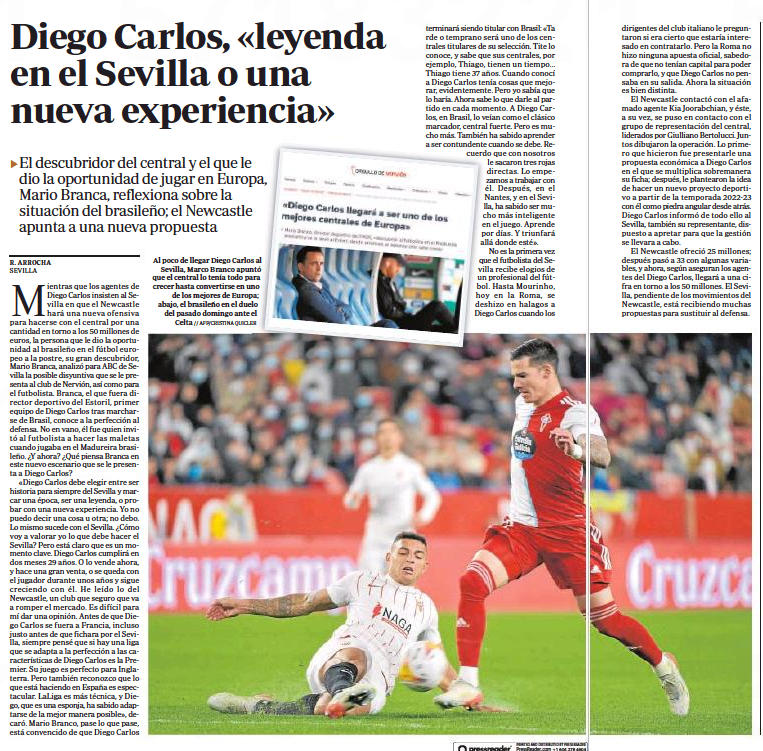 Now, the situation is quite different since the Magpies are showing interest in the player of the Andalusian club. Eddie Howe’s side have contacted Kia Joorabchian, who, in turn, has approached Carlos’ agent, Giuliano Bertolucci.

The first thing they did was present an offer for Julen Lopetegui’s man, which will see him earn much more than what he does now in Spain. The Premier League side’s idea is to make Carlos the ‘cornerstone’ of their defence.

Newcastle initially made an offer of €25m and then raised it to €33m, including variables. These proposals were not entertained by Sevilla.

ABC Sevilla now state Howe’s side point towards a ‘new proposal’. According to Carlos’ agents, the English club ‘will reach a figure of €50m’ to get the player in January.

Sevilla, ‘pending Newcastle’s movements’, are already receiving proposals to replace their own defender, meaning players are being offered to Lopetegui’s side to take Carlos’ place in the squad.