Chelsea and Bayern Munich have their eyes on Barcelona’s Frenkie de Jong, according to claims from Spain.

The midfielder has struggled to shine recently, partly because he has been played out of his preferred position.

That’s according to Sport on Tuesday, who say there are many first team players at the Camp Nou who are being scrutinised for their poor performances this season.

After this season, there will be many casualties as exits of some players are needed to bring in new faces to the club. It’s claimed ‘many eyes had been’ on the midfielder, who is ‘not having a good time’ at the Camp Nou.

The Netherlands international has been unable to enjoy himself fully at Barca and is unhappy with his own performances. He is a demanding player who knows that a lot more is expected from him to lead the side from the centre of the pitch.

Sport claim the 24-year-old must be an important player in Barca’s new project, under Xavi Hernández. However, he has ‘received approaches’ from several clubs and ‘internally, his continuity had been doubted’.

De Jong and his entourage ‘know of the great interest’ from Chelsea and Bayern and the reality is that the player ‘hesitated’ because at the Catalan club, ‘he is ‘stagnating’.

A ‘few weeks ago’, his exit in the summer was ‘considered’. However, it has now changed and 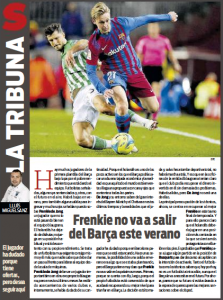 the La Liga side will not let him leave and there are two reasons for that.

The first one is because Xavi’s side count on the former Ajax star and the second is that the Dutchman is convinced he can regain his best version at Barcelona.

The decision is made and unless there is a ‘total sports catastrophe’, there won’t be any change in De Jong’s situation, despite the ‘great interest’ from Chelsea and Bayern. Barca’s immediate focus is to help him recover his old form in the coming months, so that De Jong can succeed at the Camp Nou.