Arsenal have long been interested in signing Dušan Vlahović, but the Fiorentina star could now join Juventus in the winter market.

The situation has convinced the Gunners to look for alternatives to the Serbia international. On Monday, AS reported Raúl de Tomás has emerged as a target and Espanyol are aware their star is on the agenda of the Premier League side.

Mundo Deportivo now back up the AS claims and explain Mikel Arteta’s side are ‘weighing the option’ to sign the 27-year-old, given the ‘impossibility’ of securing Vlahović’s services.

The newspaper states De Tomás’ name is ‘underlined in red’ by the English club’s sporting leaders. However, the striker’s exit from the La Liga side in January, ‘if not almost impossible, is very difficult’.

He has a €70m release clause and it’s claimed the Spaniard will only leave Espanyol if Arsenal trigger his clause. ‘Not one euro less’. 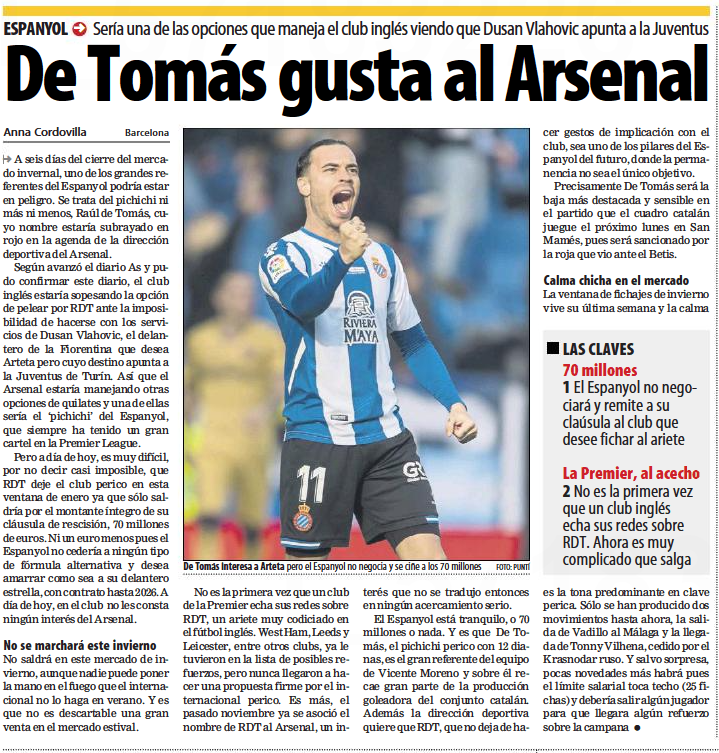 Espanyol are not willing to work out any different formulas for the star’s transfer, given that they have been working to extend the frontman’s contract until 2026. To date, they have ‘no evidence of any interest’ from the Premier League side.

Mundo state De Tomás ‘won’t go away’ in the last week of the mid-season window [unless his release clause is paid], but a ‘great sale’ next summer is ‘not ruled out’.

The Spain international has 12 goals and two assists in 21 league games for Espanyol this season.