Following the rumours from Germany claiming Newcastle United are interested in the signing of Mainz defender Jeremiah St. Juste, we now get to see the Portuguese media talking about it as well.

With Sporting entering the race for the 25-year-old, newspaper A Bola today features a piece about the competition for the transfer.

The outlet point out there are several clubs who’ve been following St. Just, and Newcastle are one of those who made approaches for his signing.

The Magpies should be aware, however, of how advanced Sporting are in this chase, because, according to A Bola, the Lions could close the signing this month. 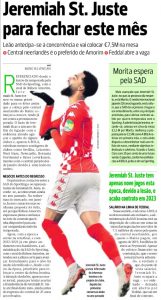 It’s said that following the contacts in the January transfer window, the Lisbon side are willing to offer Mainz €7.5m and get the transfer done in the coming weeks.

In terms of salary, they’re just using the money they used to spend on Zouhair Feddal, who’s leaving the club this summer.

A Bola doesn’t bring any details on how much the other interested clubs could offer for St. Juste.

It just sounds that, in case Newcastle are really interested, they better move quickly before Sporting get to an early deal for a summer move.