Thursday saw the first doubts creep in at Inter over the feasibility of signing Romelu Lukaku from Manchester United.

Gazzetta dello Sport were the ones relaying it, asking out loud if the Belgian was really worth €83m, echoing the thoughts spreading behind the scenes at the Serie A side.

However, two people on this planet still have faith, and those are Antonio Conte and the player himself.

The same Gazzetta explain the pressure is being put on them, mostly by the manager, who is now expected to face Manchester United on Saturday without a number one striker (Mauro Icardi didn’t join the pre-season tour).

That’s why Beppe Marotta hasn’t ‘waved the white flag’ yet, even if he knows any deal will be complicated. 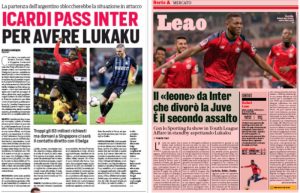 Conte’s pressing, and that of Lukaku from within the Red Devils’ camp, suggest ‘a new attempt’ to sign him could be on the way.

This leads us to Corriere dello Sport’s article on the matter, who push the same idea, reporting that Inter are ‘ready to put a new offer forward, but the base will be €60m and only through bonuses will they be able to get near €80m’.

They admit this might not be enough to convince Ed Woodward, but it would at least open a ‘real negotiation’ between the two parties.

All hope really isn’t lost, and perhaps the two sides meeting on Saturday could reopen the channels necessary to get this over the line.

Agent confirms Chelsea have been in talks for signing – Blues...