Home Europe “Is he worth it?” – Doubts creeping in at club after Man...
SHARE

It’s time. After a few weeks of “Should I, should I not?”, you decide “No, I deserve this, I’ve worked hard” and you set out to treat yourself.

After some initial browsing, you see it. It’s perfect. In your head, you’re already imagining the different ways you can use it. You get all excited. You’re nearly there. You reach out, turn the price tag around and you swear out loud. It’s too f*****g expensive. You then stand there a while. You mentally go through your financial spreadsheet. “Maybe if I eat beans on toast for a week, it’ll be OK?”. Then, that dreaded question, the one you’ve been ignoring this whole time, pops up in your head: “Do I really need this?”.

And that, ladies and gentlemen, is where Inter are at when it comes to Manchester United’s Romelu Lukaku.

Gazzetta dello Sport have it on their front page: “Is this man really worth €83m?”.

Manchester United certainly think so, hence why Ed Woodward and co. refuse to budge on their initial demand, with the only concession being the willingness to accept the payment in two instalments. 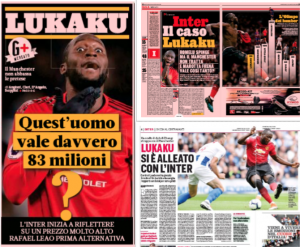 The more they think about it, the more Inter are skeptical about taking the risk of breaking the bank for Lukaku so soon after their most recent fight with FFP regulations.

Their biggest weakness, however, is the desire to please Antonio Conte as best they can after the former Chelsea manager made it clear he wanted the Belgian forward for ‘his’ Inter.

The Serie A side, in the meantime, are looking at alternatives, and the one they like the most is Lille’s Rafael Leao.

At €40m, he would be a more affordable option than Lukaku, but would also require more work on Conte’s end, at least initially.

The doubt is certainly there, and it’s echoed in part by Corriere dello Sport, who maintain both sides are ‘far’ from reaching an agreement despite the player’s best efforts to force an exit.

His absence because of his injury is bought, but they do take some solace from his ‘frozen’ relationship with Ole Gunnar Solskjaer, who hinted he could start Mason Greenwood against Chelsea, further emphasising he isn’t all that interested in having Lukaku around next year.

For now, we’re stuck, but the fact doubt is creeping into the heads of both Inter and the ever optimistic Italian press new.

The Italians know there aren’t any other offers for Lukaku, and it will be interesting to see what Manchester United’s stance is come the start of August, a week or so before the transfer window closes.

The next big moment in all this, however, is whether or not the Belgium international will be picked on Saturday to face… Inter.