The difficult financial situation at Hamburg is no surprise to the club’s fans and the German media, but recent financial results have still managed to shock, showing how bad the accounts really are.

Despite not having a wide choice of strikers, HSV tried everything to get rid of Pierre-Michel Lasogga in the summer transfer window, even making it clear, publicly, that if he didn’t leave he’d be considered a development squad player.

Of course, HSV wanted to give Lasogga the hint, it wasn’t about punishing him. Had the player stayed, and HSV continued paying his wages, then he’d have made appearances.

Eventually, Leeds United showed up and a loan was agreed, with HSV continuing to pay a percentage of the player’s wages. The last thing the German club need is Lasogga returning in the summer to wait out the last year of his HSV contract.

Hamburger Abendblatt report that ‘never in the history of the club’ has their wage bill been so big, it’s at an ‘all time high’, and that’s the driving force behind increased debts and an operating deficit. 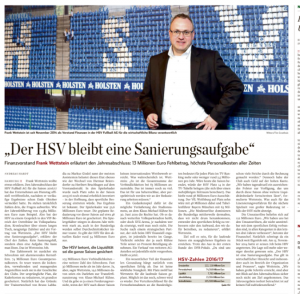 Now over €100m in debt, something which has increased €30m in a year, HSV are having to assure fans they have the liquidity for the coming season. It’s that serious, although those in charge insist it’s all fixable.

This, logically, from a HSV perspective, leads to Lasogga staying at Leeds United and never being seen again at Hamburg. And that all plays into Leeds’ hands.

A free transfer seems another logical conclusion to take from the situation, with the Championship club then offering Lasogga a longer term contract, and HSV having to pay no more.

Of course, that all depends on Leeds United actually wanting the player long term.

Hamburg are also looking to offload Lewis Holtby, whose contract ends in June, as soon as possible, with the former Tottenham player on big wages.