They bring an update on the situations of Paul Pogba, Mario Mandzukic and Emre Can, who are all being linked with moves.

Regarding Paul Pogba, Tuttosport once again affirms Juventus’ interest in bringing him back to the club. It’s a desire not only from the board, but from players and fans as well.

With the Manchester United midfielder meeting Juan Cuadrado in Miami and recording a video with him, the outlet takes it as a sign that his comeback to Turin could happen soon. 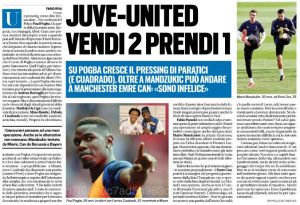 Juve director Fabio Paratici ‘won’t give up’ on making an attempt for the Frenchman, Tuttosport says, and he would have a big plan to add a few players to the deal, with Mario Mandzukic being the first one. Manchester United is said to be the Croatian’s favourite destination, and the negotiations ‘have begun’.

Emre Can is the other option, but the newspaper makes it clear that Manchester United are not the only club who wants him, since Bayern Munich and Borussia Dortmund could take him back to Germany.

Sought-after player has ‘five offers’ in front of him ‘including ones...