There’s now only a week left of what has been a rather crazy January transfer window, and clubs who had expected to do more business than they already have are having a little panic.

In their Tuesday edition, AS report Sevilla are one of those clubs, and taking claims from local Seville radio, state Roque Mesa is now a prime target for them.

Mesa hasn’t had anywhere near the impact that was hoped for when Swansea City signed him from Las Palmas in the summer, but that hasn’t put Sevilla off.

They already tried to sign the player in the summer 2016 transfer window, and AS say the club now plan to get a deal done before the end of the month.

There’s no suggestion what type of loan it would be, but Swansea shouldn’t be hoping for a big offer. With Sevilla being Sevilla, the likelihood is that any approach will be for a loan with a right, rather than obligation, of purchase in the summer window. 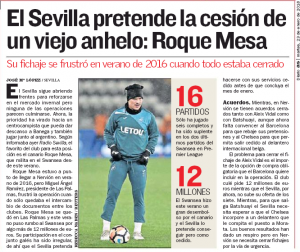 Even on that kind of deal it would be no surprise if Sevilla still expect Swansea to pay part of the midfielder’s wages.

AS state Sevilla ‘intend’ to sign Roque Mesa quickly and believe his ‘irregular’ status at Swansea City can help them out.