Home Europe Meeting planned ‘at the beginning of next week’ for potential Man United...
SHARE

We should know more about the Chris Smalling situation in the next few days.

At least, that’s what Il Messaggero are reporting on Friday, claiming that AS Roma and Manchester United should meet ‘at the beginning of next week’ to try and sort something out.

The Serie A side aren’t ready to give up on the England international just yet, and after seeing their first bid rejected, they’re back for more.

The Italians newspaper reiterate the point that Smalling is a ‘unique exception’ to the rule set by the club of not signing any players over the age of 27, and that Manchester United value the player at €18m. 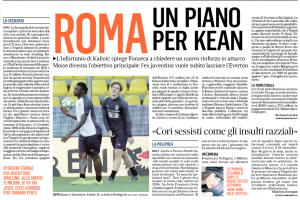 Since Roma already paid €3m to make the loan deal a possibility back in August, their plan is to offer €15m, with the total adding up what the Old Trafford club want for their centre-back.

That’s the plan going forward, so we’ll see if it works, and, as stated, there’s likely to be more news Monday or Tuesday on this ongoing situation.