Home Europe “Many thought I was still injured” – Defender on misinformation and unfair...
SHARE

Jérémy Pied won’t go down as one of Southampton’s better signings, but perhaps things could have worked out differently.

Brought in from Nice in 2016, on a free transfer when his Guingamp contract ended, Pied teamed up with manager Claude Puel again. Managerial changes and fitness issues did little to help the defender, and he left on a free this summer when his contract expired.

Now at Lille, Pied is hoping to get on the pitch soon, given he hasn’t played since January. It had been thought he was now fit to play, but there was a ‘muscle alert’ on Wednesday, report L’Equipe, and he’s doubtful for the next match, with every care being taken.

Speaking to the French newspaper, Pied was asked what went wrong at Southampton, and the 29 year old gave his side of the story: “There was my injury (cruciate), directly on arrival, which blocked me. I managed to get back before the end of the season when no one had considered it in the medical staff. Then there was a change of coach (Pellegrino taking over from Puel) and it got a little complicated. Competition has not been healthy at all times.” 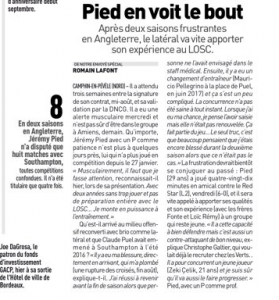 “When I had my chance, I think I seized it but it didn’t happen again. It’s part of the game… The only thing is that many thought I was still injured during the second season when I was not.”

Pied clearly feels Pellegrino wasn’t fair with him, and maybe that’s because the right back was a Puel man. Whilst the now Lille player doesn’t sound bitter, he almost certainly has more to say about what happened at Southampton, and it’s a shame L’Equipe didn’t push for some specifics.