When Javi Gracia took over at Watford, the Spanish media were genuinely excited. As we’ve covered several times, it gave them a chance to talk about the Elton John connection repeatedly.

As far as Watford went, the Spanish media knew two things: Elton John and, a distant second, that the club go through a lot of managers.

Even the Pozzo connection was largely ignored.

With Watford doing well, and therefore Gracia not sacked yet, the slant is changing, and for the Spanish media that’s pushing their country’s role it in all.

Marca have been speaking to Kiko Femenia, and quote the Watford player as saying: “Nobody imagined this start… but I do not miss these results. There are better teams, but with work we are able to beat them. On the pitch you can feel our desire to compete, the hunger to win… The city is excited and we are enjoying the moment. In the Premier League, everyone talks about Watford.

“The club had been characterised by changing managers every year. Javi was given the opportunity to continue and most of the players have continued. It has been a success and makes us a very solid group in which we all know each other.”

Marca then pressed on the ‘Spanish colony’ at Watford, wanting to tease out a comment from Kiko insinuating saying it’s all down to Spain: “The team has Spanishized. When I arrived, there were hardly any Spaniards, but now there is in the coaching staff, o n the staff. The Spaniards make pineapple, but the good atmosphere is general. Javi speaks with the group in English and when he wants to explain something more individualised he does it in Spanish. And in the dressing room you can always hear Latin music.” 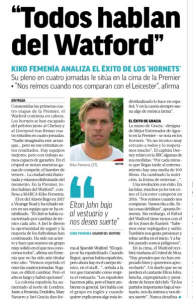 The Spanish newspaper had one final question for the Watford player, yep, Elton John: “In the important matches he goes down to the dressing room, he gives us encouragement and wishes us luck.”

This obsession with Elton John is getting more and more absurd.

Club financial reports show Man United have only paid for half...

Club have ‘carried out surveys’ for Tottenham player – Director has...

“I spoke to him yesterday” – Club president says Arsenal player...