Manchester United have been credited with an interest in Benoît Badiashile at various occasions over the past few months.

On August 26th we covered claims from France that the Premier League club and Bayer Leverkusen were continuing with their efforts to sign the AS Monaco defender. Niko Kovać, manager of the French principality club, was presented as being a big fan of the player and keen to keep him.

A few days later, Spanish newspaper AS explained Zinedine Zidane is a big fan of the player, and Real Madrid would be considering him for the summer 2021 window. They believe Badiashile can have a similar career path to Raphaël Varane.

For a move now, AS suggested €30m+ would be needed.

Saturday’s edition of L’Equipe has an article on the 19-year-old, explaining his past and going some way to praise his character as well as ability.

Manchester United and Bayer Leverkusen get a mention, with it claimed both clubs are ‘willing to put down €25m’ to sign the player. That isn’t enough to make Monaco wobble, but the French newspaper makes clear that the coming days and weeks will be decisive. 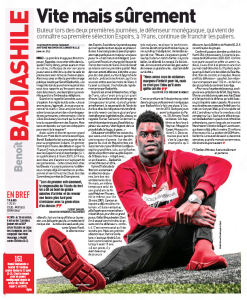 Whilst Monaco’s position is currently ‘firm’, L’Equipe say the real test is whether that will be the case when the transfer window has closed, and whether Badiashile will still be at the club then.

Manchester United would almost certainly have to raise their offer by at least €5-10m.