Manchester United bolstered their attacking division in the last window by adding Jadon Sancho and Cristiano Ronaldo to their squad.

The Red Devils may need to bring in a new striker to replace Edinson Cavani next summer as the 34-year-old’s contract expires in 2022.

Borussia Dortmund star Erling Haaland is likely to be a target for the Old Trafford club. Ole Gunnar Solskjaer, who trained the 21-year-old at Molde, ‘trusts him unconditionally’.

Thursday’s edition of Mundo Deportivo states the Norway international is the ‘most desirable forward on the planet’. He is ‘sought after by’ United, Manchester City, Paris Saint-Germain, Barcelona, Real Madrid and even Bayern Munich.

Solskjaer’s side will ‘fight’ with the aforementioned clubs to try to acquire the player’s services.

Haaland will have a fixed release clause of €75m, plus potential bonuses, in 2022 and this should be acceptable for Barcelona. The Spanish club see the Norwegian as an ‘ideal’ signing, both for sporting and marketing reasons.

They can look to sign the striker if they decide against investing €20m on new players in the winter market. The La Liga side’s economic managers are working on different options that can help them to secure Haaland’s signature. 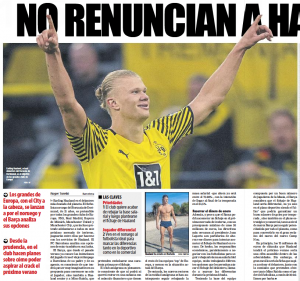 However, the ‘stumbling block’ for Barca  will be his salary demands and the hefty commission [€20m each] that Mundo say needs to be paid to Mino Raiola and the player’s father, Alf-Inge Håland.

Manchester United may be less reluctant to pay such figures, but the commission still seems over the top. They will be in the picture for Haaland and will ‘fight’ other European clubs to sign the most ‘sought after’ frontman.