In March, the Swedish football authorities had to call in the police after social media threats were sent to Manchester United defender Victor Lindelof and RB Leipzig attacker Emil Forsberg.

Lindelof had asked to be excused from Sweden selection due to personal reasons, with his wife then expecting the couple’s first child.

A rumour was then pushed in Sweden that another reason for the withdrawal was annoyance over friend John Guidetti not being in the squad.

Then after the first match of the international break, Forsberg left the Swedish camp, and it was claimed in the country that he’d done so after being angry at being taken off in the second half against Romania.

Both rumours were denied, yet it didn’t stop some taking to the internet to send abuse and threats to the two players.

Lindelof became a father soon afterwards and he’s still annoyed by all the added stress he was put through at the time. The Manchester United player is splashed across Thursday’s edition of Aftonbladet, and it’s explained the defender has refused to speak to the media involved in the initial claims. 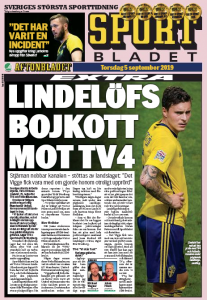 That’s Fotbollskanalen and TV4, with the latter having the rights to broadcast Sweden matches.

Stefan Pettersson, who works with the national team, is quoted as saying: “It affected him and his family in an unpleasant way.

“What Vigge had to go through made him incredibly upset. Therefore he has said that he cannot talk to Fotbollskanalen and TV4.”