Home Championship “And then I didn’t play anymore” – Stoke defender reveals why he...
SHARE

It’s been a very difficult few years for Kevin Wimmer, once deemed good enough by Tottenham to be bought for £5.4m only to play very sporadically and then be sold to Stoke City for a mind-boggling fee of £17.5m.

His spell at the bet365 Stadium didn’t go much better, as a year later, he was sent on loan to Hannover 96, where he didn’t impress enough to warrant an automatic clause based on a number of appearances to be triggered.

After returning to Stoke, it was clear he wouldn’t be playing in the Championship, and another temporary move was sorted out for him, this time to Royal Excel Mouscron in Belgium.

Yet to make an appearance since he was transferred on August 31st, the 26-year-old will have to wait until after the international break to start proving himself, with a game against KV Kortrijk first on the agenda.

Speaking to La Meuse in Belgium, the player revealed the reasoning behind this move, and it’s very much what you’d expect.

He said: “It’s not been simple these past few years for me. I come here with the desire to give my all each week and to improve. I hope to live some good moments. Before signing, I had a long conversation with Bernd Hollderbach (the manager). He impressed me and so I looked at the team, and there’s potential. 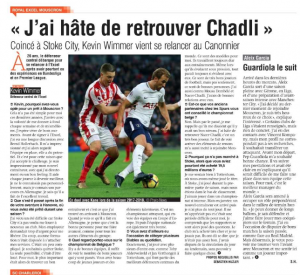 “That’s why I accepted the challenge. I’m impressed by my new manager, with whom I immediately had a good feeling. He helps every player to be better. i didn’t know him personally, but I know his career in Germany. I know he’s done a lot of excellent work.”

The player explained Stoke didn’t want him to stay in Hannover, as the club were asking for too much money, and so the only way he could get first-team football was through another loan.

Wimmer made it clear in the interview he ‘wanted to leave’ the Potters, where things really haven’t gone well for him.

He revealed why: “I felt good at Tottenham where we played for the title. At Stoke, I played during the first half of the season, but we were in the bottom half of the table. I liked playing in a league that intense, but in January, a new manager arrived and then I didn’t play anymore.

“He didn’t appreciate me and it was a difficult time for me. I understand why the fans then started asking questions. The club bought me for a lot and I wasn’t playing. They must have thought I wasn’t good enough. I disappeared immediately, without being able to do anything about it.”