Manchester United goalkeeper David de Gea last made an appearance for Spain in their 1-0 defeat to Ukraine in the UEFA Nations League tie, in October 2020.

Since then, the Red Devils star has been included in La Roja’s squad, but other custodians were preferred ahead of the 31-year-old.

Luis Enrique left the Manchester United keeper out of his squad for March’s international break. On Wednesday, Marca reported the former Barcelona boss had pre-informed his compatriot over his omission for this months fixtures.

Claims made by Marca are now relayed by AS and today’s edition of the newspaper shares more insight on this case.

It’s claimed Enrique called the former Atlético Madrid man to inform him that he was left out of the squad, as the 51-year-old wanted to test young keepers for the friendly ties against Albania and Iceland.

Sources close to De Gea have told AS he ‘did not take this decision well’ and was ‘quite upset with the coach’. He ‘gets angry with Enrique’ because the goalkeeper didn’t find the manager’s justification valid.

Meanwhile, people around the manager have highlighted another detail to AS. The Spanish newspaper said 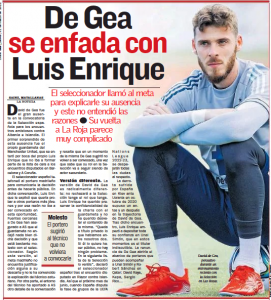 the player suggested he shouldn’t be called up again, once he found out that he will have a secondary role with the national team.

This, however, has been dismissed by De Gea and he has a ‘different version’. AS explain the keeper will ‘not reject’ a national team call up, ‘no matter what’ role he has with Spain.

It’ll be interesting to see whether the Manchester United goalkeeper will be selected for the UEFA Nations League matches in June.