Manchester United defender Marcos Rojo is once again featured by the Argentine media today, this time in a big story from newspaper Olé.

The information brought by the outlet is that Boca Juniors have now made a formal offer for the defender, with a contract of two years, with an option for a further one.

However, what makes it difficult for the La Bombonera side is that Estudiantes de La Plata are ‘still strong’ in the chase, and the player hasn’t made a decision so far.

Olé managed to speak to a few sources from Boca Juniors, who made it clear that the Manchester United player is a priority for them in this transfer window.

“Once we close him, we move on with the other roles to reinforce,” said someone who knows about the negotiations between Rojo and club president Juan Roman Riquelme.

“It’s been a while since we saw him speaking to him about his arrival.”

Boca Juniors believe they have a verbal agreement with Rojo, and that’s why they find it strange that Estudiantes are being so insistent on the signing. 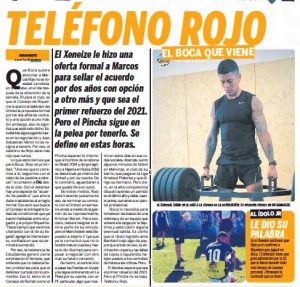 Regarding an agreement with Manchester United, Olé claims that Boca Juniors expect Rojo to rescind his contract with the Red Devils now. Otherwise, they’ll just wait and get him for free in the summer.

Olé says the Premier League side are willing to let him go, so the player’s agent is working on it, even though he’ll have to give up on the final six months of salary he’d have at the club.