Argentinian side Estudiantes could make an effort to sign Manchester United’s Marcos Rojo on a free come the January transfer window.

That’s according to Olé, who say that a ‘window would open’ for a possible return for the defender, whose contract at Old Trafford expires next summer.

Rojo spent part of last season on loan with the Argentinian giants and both he and the club were keen for him to return this summer.

Indeed they had planned for him to be one of the ‘symbols’ of a new era at the club but their efforts to renegotiate another loan until the end of the year with Manchester United have failed.

United’s intention is to sell Rojo on the European market instead and so ‘it will not be possible’ for the defender to return to his homeland. 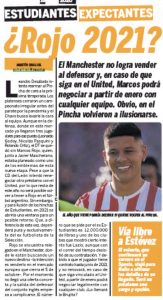 However, Manchester United are yet to find a suitor willing to pay their €12m asking price, with the main hope, Lazio, having decided against a move.

Thus United need to find a buyer, but if they can’t, a window may open up in January for Estudiantes as they will be free to negotiate a deal with him in the final six months of his contract.

A move, though, ‘will depend purely and exclusively’ on the defender, who may have several options in front of him if he is available on a free.