Corriere dello Sport have some big claims about Manchester United on Tuesday, but don’t make a song and dance about it.

Manchester United making a €50m offer for an AC Milan player would surely be worth at least a mention on the Lombardy edition’s front page, but no, it’s tucked away in an article which gets a quarter of page 23.

The Italian newspaper claim Manchester United have made an offer of €65m for Milan Škriniar. Such an amount has been placed ‘on the table’ at Inter Milan but it’s been rejected as not enough.

There have been claims of the offer previously and it’s now being treated as fact.

After that disappointment, Jose Mourinho has now turned his attention to AC Milan and his club are said to have made a €50m (€45m plus a further €5m in bonuses) offer for Alessio Romagnoli. 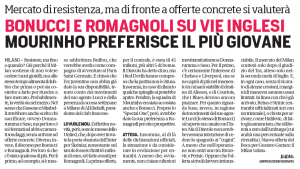 That’s been rejected too by the Rossoneri, but the Red Devils aren’t giving up and feel the track isn’t dead.

Leonardo Bonucci is also said to be an option, but Mourinho prefers Romagnoli because he’s only 23 years of age compared to the elder defender being 31.

Jose Mourinho seems to be pin-balling between Serie A defenders, if the claims are correct.