Every season, there’s a Benfica player who is expected to be fought for by several European sides. This time, it’s Alex Grimaldo.

The Spaniard has been linked to Manchester United since the Eagles’ Champions League games against the English club, and now, as the Italian press has been claiming he could replace Faouzi Ghoulam at Napoli, these stories about his departure will only grow.

Newspaper Record had a big article this weekend explaining Benfica’s plans for Grimaldo, saying that the idea is to hold him at least until the summer.

As he’s protected by a €60m release clause, the departure is not much of a concern for the winter market, but things could be different at the end of the season. That’s why Benfica are already starting to look for possible replacements. 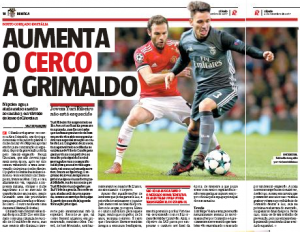 Despite saying that Manchester United are ‘attentive’ and ‘monitoring him closely’, Record doesn’t seem to have any news on when or how José Mourinho’s side would try to get the player.

But that’s an obvious move. Grimaldo may suffer with constant injuries, but has been doing well for Benfica for some time now, while Red Devils scouts watch the club every single week.

Despite having several left-back options in the squad, Manchester United still see themselves in a situation where they have to play Ashley Young in the position, so signing a replacement seems something relatively urgent.

Manchester United ‘interested’ in Colombian striker – Described as a player...