But with the European transfer window getting closer to an end, things shouldn’t last long. Actually, according to Corriere Dello Sport, a deal between Manchester United and the Nerazzurri could be found tomorrow.

The outlet claims there are a few details to be settled, but the clubs are very close to finding a deal. 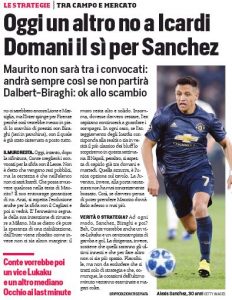 The last round of negotiations, according to Corriere Dello Sport, was held on Friday. Now new talks are set to happen, and an agreement could be found for around €5m.

It’s not made clear, but the assumption would be these figures are related to wages and who pays what of the player’s salary during a loan move.

Ole Gunnar Solskjaer’s recent quotes are seen as a ‘green light’ for the player to move, so the newspaper makes it clear that the only issue is the price paid by Inter Milan.