Manchester City star Bernardo Silva continues to be one of the hottest topics in the Portuguese media today.

It all started on Monday, when he published a message to Benfica fans on Twitter, asking them to change things at the club by voting today.

He made several complaints about the current president Luís Filipe Vieira, and that was a big blow at the club, with the official claiming to be upset with the player.

Manager Jorge Jesus came out in Vieira’s defence, claiming the Manchester City player asked to leave Benfica when being sold to Monaco back in 2014. That’d be the reason why he barely played for the first team.

The thing is that on Tuesday, newspaper Record got access to documents which showed that Benfica asked Gestifute and Jorge Mendes to sell Bernardo Silva before he even made his debut.

Luís Filipe Vieira was interviewed by Correio da Manhã today, and as the first questions were specifically about the Manchester City player, he couldn’t avoid the controversy. 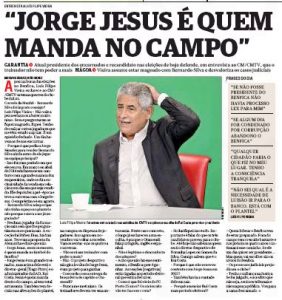 “This was at a time when he renewed. In March or April 2014, we signed a contract with the vast majority of agents, where the sale is exclusive in relation to a day on which he’s  sold. He then did the pre-season and had a conversation with Jorge Jesus. The loan is in August.”

“No player in the squad left without asking if he wanted to leave. The exception was Rúben Dias, two years ago. He had a proposal from Germany and said no.”

Now in case Vieira loses the elections this week, it’ll be safe to say that Bernardo Silva had a fair part in taking him out of the club. And if the president’s claims aren’t true, the Manchester City player will certainly come out to publicly dismiss the story again.