Home Europe Manchester City man has made it clear he wants to leave –...
SHARE

Manchester City defender Eric Garcia has made it clear he wants to return to Barcelona this summer, and it is only a matter of time before a deal is done.

That’s according to Sport, who say the centre back is determined to return to his former club and hopes the two sides can find an agreement this summer.

They report that both Manchester City and Barcelona have agreed to hold off negotiations until after the Champions League tournament in Lisbon is finished later this month.

That is because Garcia is likely to start in City’s second leg against Real Madrid and could even face Barcelona in the semi-finals.

However, his signing for Barcelona is ‘only a matter of time’ in reality as he has decided to return to the Camp Nou as soon as possible.

His hope is that an agreement can be reached with Manchester City this summer otherwise he will wait until his contract expires next year and move on a free then.

Sport explain that while he is ‘very grateful’ for the time and effort Manchester City have put into his development, particularly the way he’s been given first-team football, his wish is to return to Barcelona and play for the club. 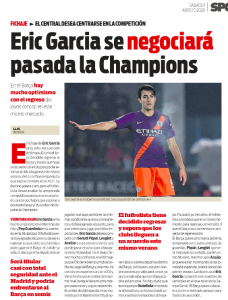 Barça have made it clear he will have to earn his place in the team, but he is convinced he can compete with their current options.

He believes now is the right time to return to his former club and Barcelona are likewise ‘confident’ about the transfer, believing Garcia is already at a high level but has room to grow.

They’ve thus offered him a ‘great economic offer’ to tempt him into leaving Manchester City, something which it seems has worked and turned his head.