Turkish newspaper Turkiye claim Leicester City and West Bromwich Albion are set to fight it out for the signature of Fenerbahce striker Vedat Muriqi.

The Kosovo international is expected to leave the Turkish side this summer, with clubs from the Premier League and Serie A said to be interested in him.

Turkiye report Fenerbahce are hoping for a bidding war for the 26 year old, and that they are looking to sell him to the highest-bidder. Fener are then planning to use this money to fund their summer transfers.

According to Turkiye, Leicester City see Muriqi as a long term replacement for Jamie Vardy, whilst West Brom manager Slaven Bilic is keen to bolster his squad by bringing in the attacker. 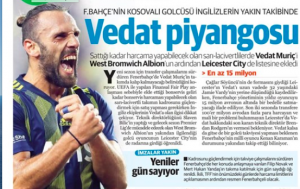 The Yellow Canaries want at least €15m from the sale, but this figure could go higher depending on how keen West Brom and Leicester City are, say Turkiye.

Muriqi has scored 17 goals and provided six assists for Fenerbahce in all competitions this season. His contract with the Super Lig club will expire at the end of June 2023.