Thiago Alcantara to Liverpool has gone relatively quiet in recent days. After a rush of reports, mainly coming from the German media, that the Reds were set to sign the Spaniard, the claims dropped away.

This week’s edition of SportBild covered the player wanting to leave Bayern Munich, and that a €30m asking price has been placed on him, but didn’t have a single mention of Jurgen Klopp’s side.

Now Mundo Deportivo state the midfielder is ‘very likely’ to sign for Liverpool this summer. The Catalan newspaper know Thiago very well from his time at Barcelona, so that could be where their side of the story is coming from.

A €30m asking price is again placed on the player, and no other clubs get a mention from Mundo. 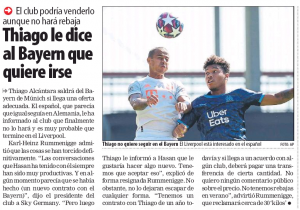 There’s either real interest from the Premier League champions, and they’re perhaps trying to knock Bayern down on price, or it’s possible the club are being used to hype interest and therefore help the Bundesliga side demand a bigger fee from elsewhere.

Bayern have already admitted that Thiago has made his exit plans clear, so now it’s just a case of finding the right club.